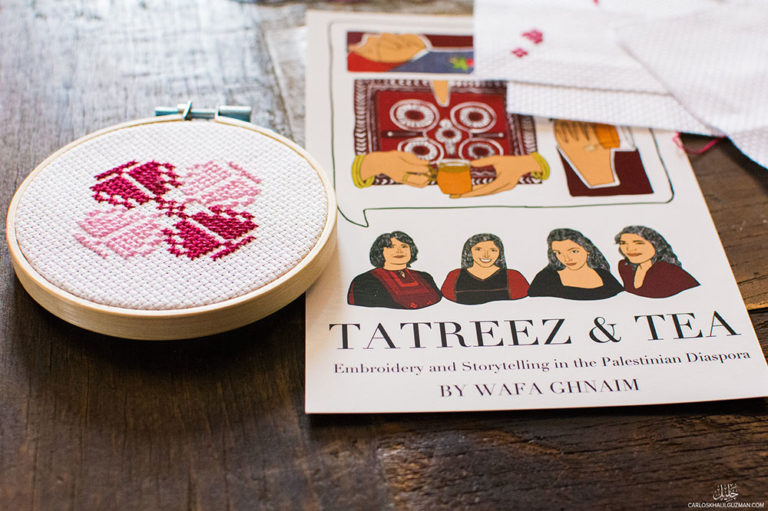 My article for District Fray Magazine

For the past 10 years, the DC Palestinian Film & Arts Festival has celebrated Palestinian culture. It has been an umbilical cord to a motherland that increasingly lives on only in the hearts and minds of its people driven into diaspora. The festival has not only been a border-defying place to hear often-unheard voices, but it has preserved traditions imperiled by extinction. It has reaffirmed a sense of identity and community for Palestinians the world over, and offered a look behind forbidding walls.

Founded in 2011 by three women – Noura Erakat, Huda Asfour, and Nadia Daar – it has showcased both local and international artists and been hosted by Busboys and Poets, the Kennedy Center, the Goethe Institute, and Studio Theatre. This year, like the diasporic culture it represents, it has gone beyond the confines of a space and into the virtual realm. Though the festival ran from October 1-10, you can still stream the films, watch the lectures, and support through volunteering and donating.

One of the highlights of the festival was Tatreez & Tea. Wafa Ghnaim, the author of the book “Tatreez & Tea” and the creative mind behind Palestinian embroidery workshops, explains the origins.

“I started Tatreez & Tea in 2015 as an oral history documentation project,” Ghnaim says. “My mother has been teaching tatreez since she came to the United States in the 1980s and, before that, she taught at refugee camps.”

Tatreez is an Arabic word meaning embroidery. Palestinians are renowned for their cross-stitching, which shines amongst the already very rich textile traditions of the Levant.

“I learned tatreez, not embroidery,” Ghnaim adds. “To say ‘tatreez’ is a true reclamation of the practice.”

In the Palestinian tradition, tatreez is passed down from mother to daughter. This is why it is such a strong thread to family and identity.

“Initially, I never saw it as a special skill because I learned tatreez when I was a young child. It was just such a natural thing and something that was always around me. My mother had dreamt of writing a book, and I wanted to make her dream a reality.”

In 2015, Ghnaim applied to a number of grants and received every one of them.

“I was a no-name coming on the scene. My mom was really the traditional artist and cultural worker. I took this as a sign that I should really do this.”

The festival’s intersectional orientation is another way in which it differs from other festivals. Bhasma Ghalayini, the editor of “Palestine +100: Stories from a Century After the Nakba,” shares the process of creating this first anthology of Palestinian science fiction.

“When I was growing up in the Gaza Strip, we had very limited access to books or films,” Ghalayini says. “You had to ask people traveling abroad to bring you back those things. I was working as a translator for Comma Press, a British publishing company, which had released “Iraq + 100,” a book that posed the question of what Iraq would look like in 2103. I wanted to do a similar project with Palestinian writers. The Nakba in 1948 displaced 700,000 Palestinians. This catastrophe that all Palestinians have a connection to seemed like an appropriate date on so many levels.”

Sci-fi is a new genre for the writers featured in the collection.

“We are not used to writing about anything in an imaginative context because it feels like it is almost too much of a luxury to write about the future,” Ghalayini adds. “But if you think about it, the current situation has all the makings of a dystopian future: siege, surveillance, lack of resources and water, pollution.”