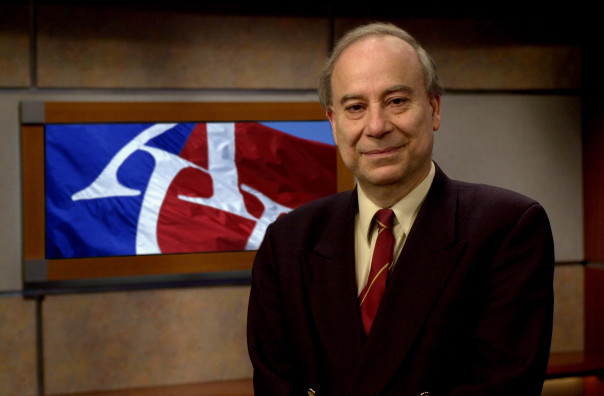 Ambassador Akbar Ahmed, the Ibn Khaldun Chair of Islamic Studies at American University’s School of International Service, recently reported on findings from his fieldwork in Europe over the past two years and gave a preview of his upcoming book and documentary.

Journey into Europe is Ahmed’s fourth project in a series of award-winning books published with Brookings Press. The series explores relations between the West and the Islamic world after 9/11. Ahmed is one of the world’s leading authorities on contemporary Islam.

His first book in the series, Journey into Islam: The Crisis of Globalization, examined what Muslims thought of the United States and the West through fieldwork across the Muslim world. The second book, Journey into America: The Challenge of Islam, showed how Americans perceived Islam and Muslims. The third book, The Thistle and the Drone: How America’s War on Terror Became a Global War on Tribal Islam, explored the tribal societies on the periphery of nations.

The next volume, Journey into Europe: Islam, Immigration, and Empire, will examine the historical relationship between Europe and the Muslim world, the contemporary challenges posed by increased immigration from the Muslim world, and the new pressures of security, globalization, and multiculturalism.

Dean James Goldgeier moderated a panel on February 11 that included Associate Professor Randolph Persaud, director of the Comparative and Regional Studies program, Distinguished Historian in Residence Michael Brenner, director of the Center for Israel Studies at AU, and Professor Tamara Sonn, the Hamad Bin Khalifa Al-Thani Professor in the History of Islam at Georgetown University.

Journey into Europe explores the intersecting issues of the increased immigration of Muslims to Europe and the growing number of right-wing parties in Europe. The study also clarifies common misconceptions about European Muslims, for instance, the idea that they subscribe to one cultural community.

Ahmed described an “ominous, threatening landscape in Europe.” His perception of Europe’s role as the “mother continent,” its large Muslim population, and continued tensions between Islam and the West make this project timely and important in contributing to “healing a fractured world,” he explained. As an anthropologist, he noted that his project is both practically-grounded and academically-minded.

Ahmed noted that the Muslim community in Europe is not united. “It is divided along ethnic, sectarian, political, and national lines,” he said. “The monolith of ‘Muslim communities’ does not exist as such as there is far too much diversity.” He noted that there are indigenous Muslims who are native to Europe and non-indigenous Muslims, including immigrants in France, the United Kingdom, and Germany.

Persaud noted that European Muslims are increasingly living in a “third space” that neither fits the traditional notion of the Middle Eastern Muslim or the notion of “Orientalism” seen in colonial times. Thus, many Muslim immigrants find themselves in a state of limbo, said Ahmed, even those who have lived in Europe for a long time, such as the Pakistanis in the United Kingdom.

The project’s scope–and engagement with a wide spectrum of Muslim experiences in Europe–makes it a very timely and cogent endeavor.

Two months after President Obama launched air strikes in an effort to “degrade and ultimately destroy” the militant group known as Islamic State or ISIS, the operation now has a name—”Enduring Resolve”—a reference to the long, difficult task of combating such an amorphous organization.

In an October event at the School of International Service convened by Distinguished Journalist-in-Residence, David Gregory, Ambassador Akbar Ahmed of SIS, Politico’s Susan Glasser, and The Washington Post’s David Ignatius discussed the prospects for the American-led campaign against ISIS and broader U.S. policy in the Middle East.

Moderator David Gregory began the talk by posing the question about how well the war on IS is going.

“It’s going badly. Wars often start badly,” explained Ignatius, reaffirming the need for the U.S. to form a strong coalition with other Arab nations. “Basically, we would have to tell them, ‘You have to put some skin in the game if you want the American help.’” He also suggested that training CIA-style guerilla fighters in Syria to combat IS might be a more appropriate style campaign than the air bombing one used thus far. Ignatius expressed concern about “whether we are walking into a trap that locks us into the kind of warfare our adversaries want and how can we mitigate that danger.” He was of the firm conviction that Iraq is “as sectarian as ever. It is badly fractured and I do not see a coherent strategy in our policy to pull it together.”

Ambassador Akbar Ahmed framed ISIS in a tribal Islamic context, a topic he wrote a book about: “ISIS has very little to do with Islam. Its members are tribesmen from tribes that have imploded over the last few decades. We all tend to think of this as radical Islam without considering this is tribal Islam which espouses a code that encourages revenge for wrong-doings.” One major distinction he made, however, is that this code has become mutated. Out of the trifecta of bravery, courage, and revenge, revenge is seen as the only thing left. He underlined that the creation of borders that split the tribes in forced ways, fanning the flames of conflict. That conflict is not Islam vs. the West but periphery versus center—societies left on the fringes fighting a central government they perceive as antagonistic to their interests.

Ambassador Ahmed explained that tribal Islam is a militaristic culture and one that is constantly in conflict with Islam itself—for example, tribal Islam eschews the inroads made for women by Islam, such as inheritance rights. “We need to understand the context of these movements and not call them Islamic movements.” In couching the conflict in center vs. periphery, Ahmed also suggested that public opinion in Pakistan, for example, is in favor of strikes against ISIS, whereas public confidence in Iraq has collapsed. He believes that Muslims worldwide support the fight against ISIS and that getting the support of the people is important in forming an alliance. Susan Glasser spoke a bit more on the policy side of the issue, calling Obama an “extremely reluctant warrior.” “We are seeing a fairly public debate between the President and the generals on strategy. We have a lot of generals saying the war plan will not work, that it is based on false theory, premised on the notion that an air campaign on guys in pick-up trucks.”

All three panelists expressed the opinion that ISIS is an aggressive, flexible, and adapting enemy and that there is tremendous trepidation about entering into yet another quagmire of conflict in the Middle East.

David Ignatius discussed some of ISIS’ tactics, referring to the beheading of people as “their version of shock and awe. The element of raw physical intimidation, of an almost pornographic  level of violence, is what is so attention-grabbing.” But he referred to the case of Al Qaeda that had grown so hated because it made so many enemies in fighting a sectarian battle against more than the U.S. “It is not possible to brutalize your way to success.” He explained that ISIS is able to gain wealth by engaging in kidnapping, selling oil, and taking over central bank branches. They also have clever strategies for gaining recruits. In addition to a powerful social media empire, they have the practice of attacking prisons, specifically in Mosul and Ambar, whereupon liberating several thousand prisoners, they gain new fighters from that cadre. “They are really smart in how they plan operations.”

Originally published here
Also here
“After 9/11, I dedicated myself to creating bridges of understanding between different cultures and faiths. The relationship between the West and the Muslim world seemed to especially be fraught by much misunderstanding,” says Professor Akbar Ahmed. For his latest book, The Thistle and the Drone: How America’s War on Terror Became a Global War on Tribal Islam, Professor Ahmed focused on tribal areas: The peripheral areas between states and on the communities living between borders.  Ahmed provides an exhaustive survey of tribal cultures across North and East Africa, Yemen, and Southwest and Southeast Asia. The title of the book is a metaphor; the thistle was how Leo Tolstoy described the tribes living in the Caucuses in his book Hadji Murad because, like the flower, they were thorny and prickly. The drone, on the other hand, is a symbol of globalism and the epitome of technological advancement.
In The Thistle and The Drone, Ahmed explores in-depth tribal history, culture, code of honor, and tribal Islam, an Islam that is very different in nature from more mainstream branches of the religion. Drawing on 40 case studies that Ahmed and his team of student researchers interviewed and analyzed, Ahmed couches his discussion in the dichotomy between center and periphery.

The first main finding of the book is that terror towards the West is very much perpetrated by tribal people. 90% of the 9/11 hijackers were from Yemeni tribes. The rhetoric used by Osama bin Laden and many others has always been very tribal in nature, Ahmed suggests.  Thus, he says, “we [the West] are fighting one kind of war when it is an entirely different kind of war to them.” The second major point is that Ahmed believes that there is a way that the tribes can be pacified via peaceful and diplomatic means, citing the example of the Aceh in Indonesia or the relations between Scotland and England.
The central argument of The Thistle and the Drone is that “war on terror” is ultimately a war between a central government and a periphery. In Ahmed’s view, the “center” is nearly always in direct conflict with the tribal societies—a war of the state vs. its domestic antagonists, if you will. These tribal societies are often fighting against modernity or increasing encroachment upon their territories and way of life– the Rohingya in Burma, the Tuareg in Mali, or the Pashtuns in Afghanistan and Pakistan, for example. “These tribes already have turbulent relations with the central government, which has failed to bring them into the nation, and the war on terror has only exacerbated this tension.” In addition, their own fellow Muslims often look upon the tribespeople as backward as well. This central vs. periphery tension is something Ahmed sees as fixable but not through the use of drones in the war on terror. “Drones have in essence become a symbol of Western arrogance. A far cry from the surgical-precision weapons they are described as, they have devastating moral costs. We often don’t hear about what it is like to live in an area where drones are buzzing overhead all night long—how often the women and the children suffer…”