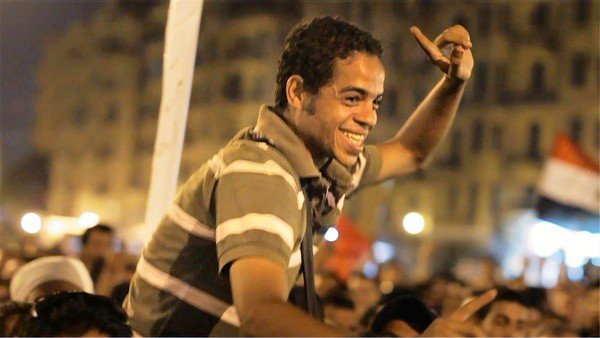 My review of The Square

The Square, a documentary by Egyptian-American filmmaker Jehane Noujaim (Control Room) is a heady tour-de-force look at the Arab Spring and its aftermath. Initially covering only Mubarak’s ouster in 2011, Noujaim continued filming throughout the summer and the next tumultuous two years, capturing the the Egyptian Army’s removal of the elected President Mohammad Morsi. The theme of the film is unequivocally revolution, a loaded word that has inched its way towards meaningless and obsolescence, yet here comes roaring into vibrancy. The Square is an engrossing look at the lives of several activists who remain doggedly staunch in their quest for change despite increasingly harrowing circumstances and a constantly changing political landscape. Perhaps surprisingly, the film, while grounded in realism, is unapologetic in its idealism. These activists, although fighting for political change, are actually about as soured on politics and politicians as one can be – the change they seek out and their motivations are universally human and refreshingly not power-centered.
The main character in The Square is “the people,” a word referenced many times and one with an actual significance very unlike the cynical, hollow place it holds in Western parlance. Instead of merely a cheap ploy used by grandiloquent politicians to play upon the emotional heartstrings of a vulnerable public, it is something very much of an undeniable reality. The sight of literally millions of people lining Tahrir Square is moving beyond measure and illustrative of what “we are united,” can precipitate. It’s impossible not to wonder why this has yet to happen in the US and makes palpable to the viewer how a dictator in power for over 30 years can be deposed by a mass protest of such unbridled will. The “star” of the film, if there is one, is 20-something Ahmed Hassan, an impossibly ebullient working-class youth. Facing increasing disillusionment and personal danger, he remains optimistic even as the regimes change but the circumstances of the people do not. The Square eloquently shows how impossibly fraught and elusive that very concept is and how revolution is hard to come by in a world mired in politics. As he poignantly puts it in regard to the Muslim Brotherhood’s maneuvering into power, “while we were dying in the streets, they were making deals.”
The Square also does an excellent job of demystifying the headlines for a Western audience and untangling a very complex political situation without relying on pundits for commentary. Ultimately, it drives home the point that figure heads nary make a country – all the country’s institutions are the regime. It also portrays the strong role that the military plays in Egypt, especially in their ability to turn a revolution into a war, as Ahmed explains. The fact that the protestors all come from really different backgrounds – for example, actor Khaled Abdalla is foreign-born and of an activist background and Magdy is a member of the Muslim Brotherhood – serves to underline that divisions were not present during the initial protests against Mubarak. “We were united…one hand.”
Despite what seems to be a political quagmire with nothing immediately positive to offer to the people of Egypt, The Square will leave you feeling uplifted by what “the people” can do to effect change. Ahmed explains that they, ”created a conscience, not a political force. We created a culture of protesting and gave the people ownership of their freedom.” The Square is really about something fundamental inside people that moves them to fight injustice. Tahrir Square remains a symbolic peace of land not because of what circumstances it brought about but because it showed what a people united can do. While this may sound incredibly simplistic, The Square proves that it is still something that can take place.