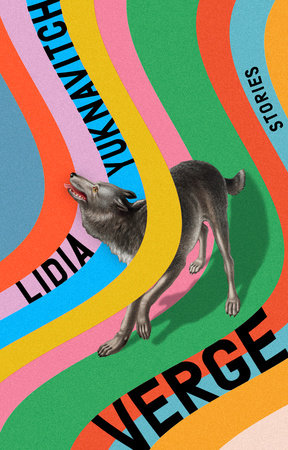 My review for the Washington Independent Review of Books:

A breathtaking series of insights into people who are “becoming.”

Lidia Yuknavitch’s debut short-story collection, Verge: Stories, is an incandescent testimonial about lives spent on the margins, on the cusp, on the edge, on the periphery, on the frontier, on the birthing place…of something.

Or everything. Or nothing at all.

Yuknavitch’s writing is visceral and unsettling, the metaphors eloquent and moving. “Who amongst us can see a self,” she asks, and responds with singular characters sketched in stark detail, their burdens strange yet familiar. Her descriptions are terse, as though built on picked-clean skeletons, but the flesh emerges from the pages, raw and refusing to be contained.

“The Pull” is set on a capsizing raft of refugees in the Aegean Sea — the people “a wave of other leavers.” Those left behind “never swim another lap toward their futures.” Two children who had been on the swim team back home (and, as the author so pointedly writes, are from a reality that has neither a future nor a past) tie the raft to their feet and swim toward shore: “This story has no ending. We put children into the ocean.”

This is exactly the kind of parsimony that marks Yuknavitch’s writing — the pathos is in the pith-os, I would like to think.

“The Organ Runner,” a story about an 8-year-old who literally runs organs between seemingly disparate yet intimately sewn-together bodies in dark streets, is equally relentless in its quiet condemnation of us:

“Whatever money — that thing more valuable than a body, or a people, or a nation — had changed hands was worth more than the life of one homeless creature in this newsless, powerless, invisible country.”

The author is neither political nor polemic, but her witness-bearing will disquiet readers. The simile “he held one arm against his body like a broken wing” is a trenchant commentary on dehumanizing others in a literal and figurative sense. And again, the author makes clear the damning, if not always apparent, connections tying the globalized world together: “Kiril would die but not by her hand. Or he would die by all of our hands.”

“Second Language” takes this tacit condemnation to a crescendo; the story will hold you hostage long after you finish it. The protagonist is a nameless, sex-trafficked child locked in a house near a freeway (anything but free to her) and “delivered like a card-board box from a UPS truck, sifted through by rummaging hands like recycling,” along with other “girl popsicles.”

To the outside world, she is a ghost, barely even noticed by the “disaffected latte pity” gaze. Her “bodyworth” is the only thing concrete about her — that, and a story in a foreign language. A fairytale, told in a grim and otherworldly tongue, which lulls the popsicle girls to sleep: “Girls are growing from guts, enough for a body and a language all the way out of this world.”

Speaking of language, the author is a masterful writer of towering genius. Her comparisons are so intricate, yet heavy, they often require a reread. A drug addiction is “four long years of youth sliding cold silver glint into waiting blue.” “He builds the fire like a new faith for all the white (snow) against them.” “She aches to summer over into a different life.” “The streets are clean and cured and uncultured — no, that’s not what I meant. Uncluttered, I meant.”

Yuknavitch is also eloquent in her depiction of women. The female protagonists are on the run, gnashing and trashing and aching to tell their stories in their own language. She compares a “street walker” to Mary: “When I see an image of Christ, I picture Mary so drawn and gaunt and tired and angry and spent to the point of emaciation that she can barely wear her own face.” But she is no saint, just an “ordinary woman eaten alive by her own heart, her own veins, her own cunt.” Another character is “on the edge like Ophelia, rewriting her ending.”

Verge is enthralling and should garner Yuknavitch much-deserved acclaim. It is the author’s answer to the question, “Does it hurt more to keep the secrets or to tell them?” While her characters may be on the edge of the storyline, in the dark corners of the nightly news, residing in a forgotten, misshapen geography, speaking in tongues, the book reminds you that you know these people; that you are bound to these people; that you are these people.