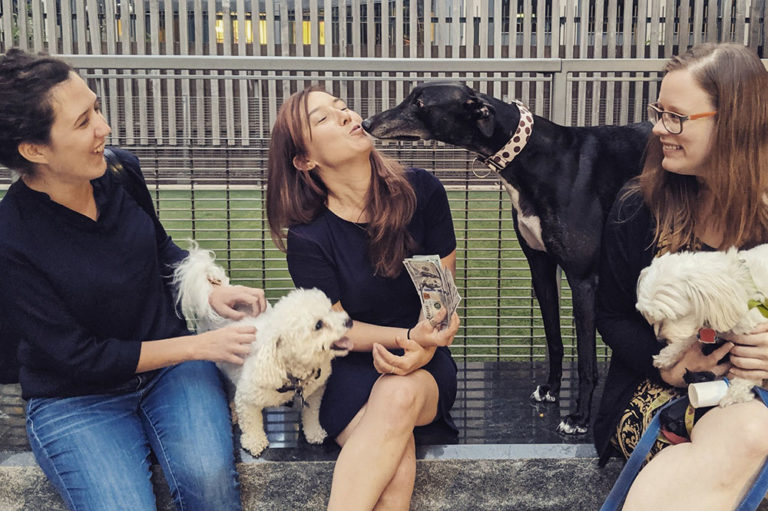 My article for District Fray Magazine

Longtime D.C. resident and fourth-year PhD student in George Washington University’s Department of Anthropology, Courtney Sexton studies the coevolution of humans and dogs. She is particularly interested in nonverbal communication and behavior.

Sexton’s graduate program requires students to undertake an internship in the public understanding of science, promoting how to present scientific information to nonscientific audiences. When her internship project got funded by the D.C. chapter of the Awesome Foundation, she knew she was on to something.

She started thinking about the project at a time when the public discourse around dog ownership and public space was particularly contentious. And while many dog owners are aware of their responsibilities to their animal companions, they may perhaps be less aware of what their animal friends are trying to communicate to them.

This is how Decoding Dog Talk was born. Before the start of the pandemic, Courtney planned to host a series of Tail Talk tables at dog parks and recreation areas across the city where residents could get free information, diagrams and mini demos to help them learn basic principles of dog behavior.

“Most humans are not in tune to the subtleties of dogs’ language,” she explains. “Hint: Not all tail wags are created equally. Being armed with even a basic understanding of dog behavior could reduce stress on the animals and increase their quality of life – [which is] always a challenge for city pets – and help to avoid complications and confrontations with neighbors and other members of the community.”

After the fur-ruffling that New York Times article “The Dog Park is Bad, Actually” caused, this sounds like a much-needed thing to yap about. Dog parks are great places for play, but they certainly have downsides as well.

“The reason why I would like to be there for those Tail Talks is it’s hard to give general advice. The context is critical to understanding the body language of the dogs. Not all tail wags are happy. Also, the owners tend to space out while their dogs are constantly looking to them for guidance on how to handle social situations.”

Sexton says the way humans often view social and antisocial behaviors in dogs is quite wrong.

“I hope to impart on folks the importance of the contextual clues in body language and the trigger warnings that hint their dog is about to get into a fight,” she adds.

The fights between dogs can sometimes lead to their learning inappropriate behaviors like bullying – and then repeating those behaviors outside the park. Knowing how to recognize signs of aggression and learning how to control the dogs in that case is especially important. Simple obedience commands are critical in a dog park environment. While Decoding Dog Talk is on hold, learning about dog communication is definitely barking up the right tree. And as Covid restrictions lessen, Sexton plans to starting hosting safe, socially distant Tail Talk Tables.

“I was actually able to host one socially distanced Tail Talk Table at the Virginia Ave Dog Park a couple of weeks ago, and it went great.”

Learn more about Sexton’s project here and listen to her speak on the topic here.