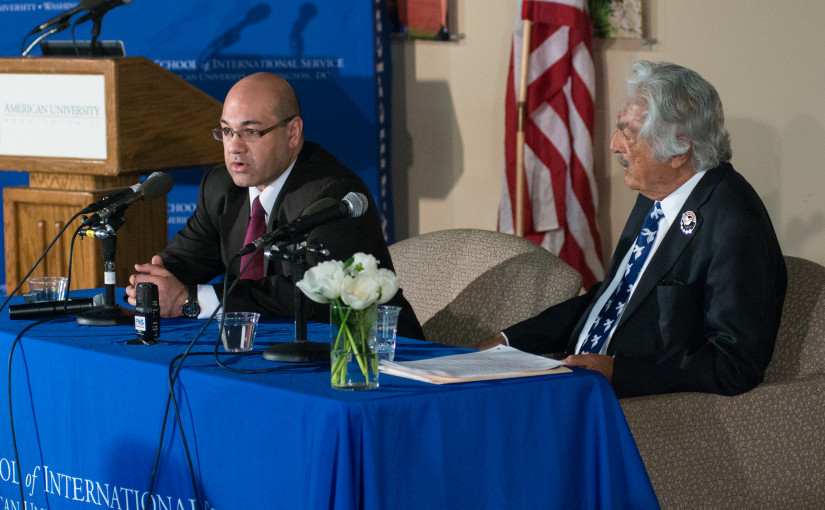 My article
“The reality in Iraq is very different from that portrayed in the international media,” affirmed the Iraq Ambassador to the United States Lukman Faily in a talk at American University on February 18th. The focus on violence and the identification of sectarianism as the root cause of Iraq’s violence creates what he called a “sectarian meta-narrative,” that is far too simplistic of a paradigm and one that has plagued not just Western media portrayal of the region but also Arab media rhetoric as well. “It is easier to define a country in binary terms; to find simple, sellable elements to hone in on in the media. Violence has long stopped being sectarian in nature since about 2006-2007.” Ambassador Faily defied all the conventions of a typical “ambassador speech,” electing to speak frankly on the many misconceptions surrounding Iraq’s democratic transformation.
“Dictatorship changes the fabric of society.” Upon my request to further expound on this, the Ambassador stated that, “the longer and more ruthless the dictatorship, the longer it takes to shake off that coat, if you will. The state is there for the needs of the dictator so the people no longer associate themselves with the state. In a sense, people dislodge themselves from the state, which is why, for example, we saw the looters when the regime collapsed. The years under Saddam were detrimental to the Iraqi society. People began to associate the sanctions with the US because they were so removed from the state as a concept.” Psychologically, he explained, there is a need for cleansing after living so long in those circumstances. “Dictatorship demoralizes people, it makes for a more inward-looking, self-centered community and the longer it lasts, the more adverse the effect.” Placing Iraq more in the context of the Arab Spring movement, Ambassador Faily described the mindset of the people as “I want change, but I am not sure what the new social contract should look like.” People are after a new social contract, he suggested, but the weak civil society institutions in place, and the total dearth of NGOs and other community organizations, mean that the foundations are still not there and the role of the citizens is still unclear. “This is a young democracy and more people participation is needed.” This also necessitates the need not just political reforms but for social and economic ones as well.

Ambassador Faily then offered a very theoretically-rich construct to apply to the state of Iraq—the dichotomy of nation building vs. state building. “People often conflate nation with state, but this is a bit more complicated in Iraq. The state as a concept is very clear, but the definition of what it means to be an Iraqi is evolving.” What is the nation, he asked, especially in a society as heterogeneous as Iraq, where people can define themselves by a plethora of factors such as region/province, religious, or ethnic identity. He outlined several questions, including, “Do we rebuild the national character or the state institutions?” and “Do citizens have a stake in the nation or in the state?”
In addressing the current economic climate in Iraq, the Ambassador stated that the adverse impact of past sanctions was severe damage to the economic infrastructure. The current rate of economic growth is 9-11%, with steady increases in oil production and income levels. Unemployment, however, remains the same due to an over-reliance on oil production. Since oil as an industry is not very labor-intensive, he explained, it employs less than 1% of the population. “The core structure of the economy has to be managed better, with less reliance on subsidizing certain sectors.” Iraq also hopes to maintain a long-term investment relationship with the United States.