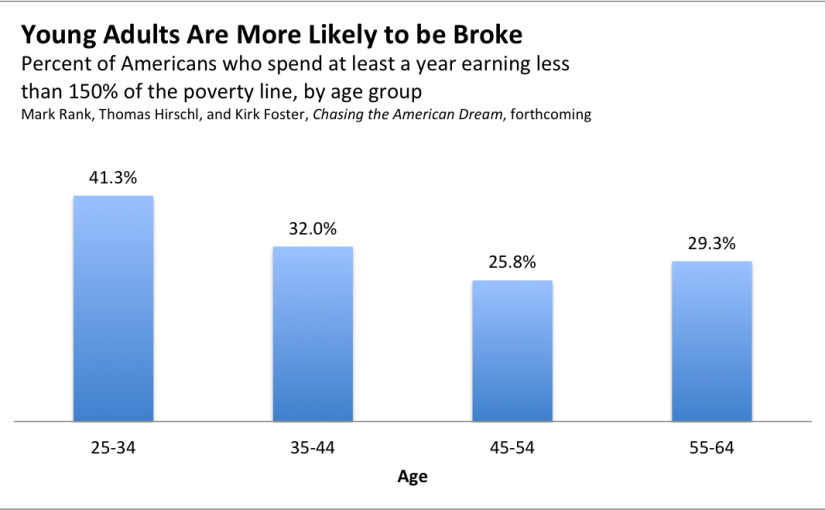 My Article For Voice Of Russia

WASHINGTON (VOR)— Much ado has been made about the purportedly entitled Millenial generation, but the reality of most young people’s lives is more akin to an urban dystopia than an utopia.

Few topics in public discourse are more plagued by pervasive myths and misconceptions than poverty, especially about how and to whom it happens. Poverty, Dr. Mark Rank points out, is a surprisingly commonplace experience. “The question for most Americans is not whether they will experience it at some point but when.” Dr. Rank and long-time collaborator Thomas Hirschl of Cornell University are releasing a new book in February 2014 entitled Chasing the American Dream: Understanding the Dynamics that Shape Our Fortunes. It explores the shifting nature of the American Dream—how tenuous it has become, how has the concept morphed over time, and how economically viable it is. Dr. Rank describes the methodology in the book as based on a “large longitudinal panel of data from 1968 to 2009 and from it, we generated a life table of the likelihood of experiencing particular economic events, thus quantifying the measure of ‘economic insecurity.’ The book also includes interviews with 75 people, as a way for us to study their responses on the question of the American dream.”
Mark Rank’s research indicates that nearly 40 percent of Americans between the ages of 25 and 60 will experience at least one year below the official poverty line during that period ($23,492 for a family of four), and 54 percent will spend a year in poverty or near poverty (below 150 percent of the poverty line). Yet, the group of young adults aged between 25 and 35 seems be especially susceptible to financial peril. As the figure below illustrates, almost 40% of young adults spend at least a year living below 150% of the poverty line. “Young adults have always been at the greatest risk for economic instability as this is typically a low point in their income earning ability,” Dr. Rank explains. But undoubtedly their economic hardships have been compounding in recent years.

The way that Dr. Rank measured the variable of economic security was living below the poverty line, loss of job, or being on some sort of public assistance program, like welfare or food stamps. The employment status of young adults was a large contributing factor to their economic insecurity. Fewer Americans aged 18 to 29 worked full-time for an employer in June 2013 (43.6%) than did so in June 2012 (47.0%), according to Gallup’s Payroll to Population employment rate. Fewer young adults with a college degree now hold a full-time job than did so in June 2012 (68.9%) and in June 2010 (67.9%). Similarly, fewer young Americans without a college degree have a full-time job now than in June of the previous three years. And as Dr. Rank’s research indicates, unemployment in that age group is the highest of any age group.

According to a Pew study, since 2010, the share of young adults ages 18 to 24 currently employed (54%) has been its lowest since the government began collecting these data in 1948. And the gap in employment between the young and all working-age adults—roughly 15 percentage points—is the widest in recorded history. In addition, young adults employed full time have experienced a greater drop in weekly earnings (down 6%) than any other age group over the past four years.
And what about the white picket fence part of the American dream? Home ownership is becoming less and less attainable to young adults, even in cities with high concentrations of upwardly mobile young people like Washington, DC.
According to the research of William H. Fray from Brookings, while homeownership across all age groups fell by 3 percentage points to 65 percent from 2007 to 2012, the drop-off among adults 25-29 was much larger — more than 6 percentage points, from 40.6 percent to 34.3 percent. Declines in homeownership for those ages 40 and older over in that five-year period were more modest.
The District of Columbia, with its high share of young adults, had the lowest homeownership rate across all age groups at 41.6 percent, followed by New York at 53.9 percent.
Being young puts one in a precarious economic position, but being non-white seems to especially exacerbate the problem. “If you are white, there is a fairly large chance that you will experience economic instability at some point in your life. If you are African-American or Hispanic, this chance now becomes almost a certainty. In the 25-60 bracket of white respondents, a very significant percentage—80%– had experienced one or more economically calamitous events. In the 25-60 age group of non-white respondents, 90% had experienced the same economic insecurity,” Dr. Rank explains.
So what does this all say about the attainability of the American dream? Dr. Rank thinks that concept, while not entirely rendered null, has certainly morphed. “The American dream is no longer about making it big or making a lot of money. Our respondents felt that it now meant leading the kind of life that you want and makes you happy. They also pointed to it being the idea that if you work hard, you should be able earn a decent living and be in a secure economic position. The third component was the importance of having a hope for the future, a certain optimism that one’s children and ensuing generations would fare as well or better.”
Read more: http://voiceofrussia.com/us/2013_11_23/The-young-and-the-penniless-25-35-age-group-vulnerable-to-poverty-3152/