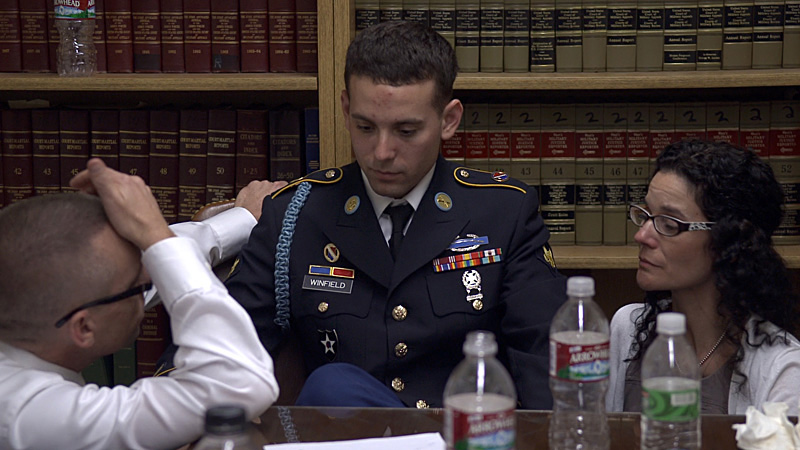 My review of the documentary The Kill Team

Director Dan Krauss’ The Kill Team is an absolutely enthralling tour-de-force documentary that stares unblinkingly down the ugly, dirty face of war, offering a sobering look at its specters. There are no heroes to be found here, only the very banality of extreme violence. As Specialist Adam Winfield says, “There are no good men left here.”
The Kill Team is the story of a platoon that made headlines in 2010 after it was discovered that 5 soldiers in the group had essentially murdered 3 innocent Afghani civilians “for sport.” The film focuses on Specialist Adam Winfield who had attempted to alert authorities to the “kills” taking place, only to himself be charged by the Army and face a lengthy prison sentence. The absurd dichotomy of someone being labeled a whistle blower and a murderer in the same breath lies at the crux of The Kill Team’s main argument: the military can be a ruthless machine that often victimizes its own, not just the enemy.

The main story line of the film is Winfield’s court battle, but all of the other people involved in the murders are also interviewed, except for the mastermind and leader of the unit, Sergeant Gibbs. Spc. Jeremy Morlock’s seemingly emotionless account of how “we straight murdered that dude,” is chilling if taken merely as a sign of his apathy to violence. Looking behind the mask, we get the idea that the macho culture of the army he has been reared in has taught him to suppress feelings.  He frequently references “the ideology of the infantry world,” this idea that life in the Army was supposed to be some kind of a glorified Top Gun-esque escapade of patriotism and heroism, which by default involves the killing of the enemy. It’s certainly a novel perspective: all too often we are led to believe that the people who enlist actually seek to avoid combat. Morlock belies that stereotype — he describes an entire platoon of thirty-some men that idolized Sergeant Gibbs, who asked him to help them get “kills” as well. Gibbs’ collecting of finger bones for a grisly war trophy necklace does not strike them, seemingly, as wrong.
The Kill Team offers a scathing – though unstated – condemnation of the Army who essentially made a scapegoat out of Winfield, who had all along attempted to alert the higher-ups, labeling him not enough of a conscious objector. Winfield brings up a salient point: “We tend to handle things in-house. Had I reported it, it would have come right back down the chain-of-command to me.” As his lawyer points out, the military justice system is not impartial: they are essentially the judge and the jury. Furthermore, the film puts into question just how rogue of a platoon was this or was their conduct commonplace, as the soldiers suggest and an issue only because they were caught. The chilling concept of a “drop weapon” is introduced. It is a weapon that is off-the-books and can be “dropped” on anyone, making him/her appear as an aggressor and justifying any violence committed against him/her. Gibbs apparently had access to a whole cache of this kind, including grenades and AK47s. The film raises the interesting question of why uphold the seemingly legality of a war when the very concept of it implies a level of chaos and violence that renders such track-covering pathetic in the true sense of the word.
There is little question about Sergeant Gibbs motivations—he calls the Afghanis “savages.” But what about the other members of the platoon, bullied into submission by him and unable to dissent for fear of their lives? The terrible face of the “war on terror” is made poignantly human here: “Nobody is innocent here. We are getting blown up every time we go up there to talk to them or build them a well or a school.” As Morlock explains, “the constant pressure to having to kill and being shot at is overwhelming. It is impossible not to surrender to the insanity of it all.”
The Kill Team is easily one of the most thought-provoking documentaries this year and certainly one of the best ones on the war in Afghanistan. It’s a lot more than the plucked from the headlines story of a rogue platoon; it’s the living embodiment of Black Sabbath’s “War Pigs:”
Politicians hide themselves away
They only started the war
Why should they go out to fight?
They leave that role to the poor
The film is a testimonial to the kind of damage caused for a cause that is impossible to name or understand.