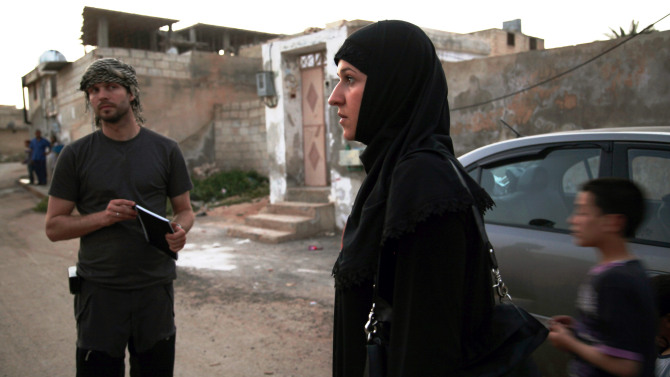 My review of the film E-Team

E-Team, co-directed by Katy Chevigny and Ross Kauffman, is an immersive look into the work of Human Rights Watch’s Emergency Team, a group of people that travel to war-torn countries, document human rights abuses world-wide, and then draw media and government attention to those crimes.

Perhaps the greatest strength of the film is in its insider look at exactly how this sort of work takes place, the perils involved, and the authenticity and rigor expected. More specifically, the team is careful to get thorough (multiple) eyewitness accounts, which preempt questions about the veracity of the reports produced by Human Rights Watch. We meet Anna Neistat and Ole Solvang, a husband-and-wife team, who are literally on the ground as bombs are going off around them in Syria. The viewer gets a keen sense that this is not the fare of an armchair philosopher IR wonk; Anna and Ole do not wait until “conditions are safe” to make their way to the conflict areas.

The film’s portrayal of the civil war in Syria is especially poignant. They smuggle themselves across the Turkey-Syria border in 2013 by literally running across a barbed wire fence. There, they take the testimony of frightened Syrian villagers who huddle with them in an apartment rattled by the explosions outside. The sense of terror is palpable, and the feeling of death ever present. In one of the most moving scenes in the film, a mother who has just lost three of her sons, says, “What is the point of talking?” as she cries. E-Team convinces us that even in the incredibly cynical world of politics, the stories of the people suffering – trapped in a situation beyond their control – have incredibly gravity and that suffering should not go unnoticed just because it is so rampant.

We also meet the E-Team’s other members: Peter Bouckaert, a weapons specialist, and Fred Abrahams, the “father” of the group. Abrahams testified against Slobodan Milosevic at the Yugoslav Tribunal, recounting the atrocities he encountered in Albania. Abrahams’ testimony against the smirking Milosevic is an illustration of what happens when the heartbreakingly human meets with the glib heartlessness of the political. The team’s work aims to simply give voice to those who were forever silenced, to shine light on the hidden.

E-Team, despite its very political matter, stays clear of pontificating asides. In fact, one gets the sense that the kind of work Human Rights Watch does is very much the kind of work that journalists should be doing: documenting stories, gathering accounts of various witnesses, and speaking on issues of concern to all of us as humans. Yet, they seem to be able to do more than journalists can. For example, it is their report on the Assad’s regime use of chemical weapons that spurs UN Security Council action on the issues and negates the rebels being blamed for the attack.

The team also visits Libya to document survivors’ accounts of Gaddafi’s attacks on civilians and protesters in 2011. Here we see how the knowledge of weapons experts like Peter is used to pinpoint who fired what weapons, when, and how. In other words, the film does a great job of illustrating the breadth and veracity of HRW’s reports and the extensive knowledge of the people compiling those reports. The organization’s mission, in its own words, is not necessarily to effect policy change per se but rather to document abuses and alert us to them. Despite the harrowing and dangerous nature of their work, the team members come across as atypically down-to-earth and not even a little bit self-righteous or arrogant. The adrenaline junkie zealot stereotype is not to be found here.

E-Team benefits from incredibly tight editing and crisp cinematography that belies the guerrilla-style film-making usually associated with this genre. The engrossing storyline and behind-the-scenes look at human rights work gives the viewer a lot to appreciate.