A little more than a week ago, the bearded beekeeper and co-founder of Burt’s Bees, Burt Shavitz, passed away. “Burt Shavitz, our co-founder and namesake, has left for greener fields and wilder woods,” the company wrote.

It all started with candles. Shavitz had a honey-making business in Maine when he teamed up with Roxanne Quimby in 1984, who used his leftover beeswax to make candles that she sold at a craft fair.

The candles were a hit — they made $200 at their first fair and $20,000 after a year, according to the company. The pair launched a business together, soon expanding to personal care products like lip balms and soaps.

The brand’s signature and best-selling product, its beeswax balm, was introduced in 1991.

Hold on…how did a bee-loving, business-hating Maine hippie start one of the most beloved cosmetics brands?  Burt Shavitz was not interested in lip balm or moisturizer and definitely not big business. His passions were bees, his golden retrievers, nature…

Then in the summer of 1984, he gave a hitchhiker named Roxanne Quimby a ride. What followed…well, a history of thumbs up and thumbs down. Quimby essentially created the business.

Shavitz and Quimby eventually parted ways and not happily, after the business moved from Maine to North Carolina and grew exponentially. In 1999, she bought him out for $130,000, according to The New Yorker. She later sold most of her share to a private equity firm for more than $140 million. She reportedly gave Shavitz $4 million. “If Mr. Shavitz had held onto the stake he traded to Quimby for $130,000, it would have been worth about $59 million,” the New York Times wrote in 2008.

Burt’s Bees was sold again to the Clorox Company for nearly a billion dollars in 2007. Today, the products are sold in over 50 countries. Shavitz was compensated for the use of his image on the label, and he was paid to make special appearances to promote the brand.

“In the long run, I got the land, and land is everything.  Money is nothing really worth squabbling about. This is what puts people six feet under. You know, I don’t need it.”

In his typically wry way, he commented on the company takeover, “Except for the fact that they’re from Clorox, they’re nice people.”

The reluctant face of Burt’s Bees was an intensely private man: “A good day is when no one shows up and you don’t have to go anywhere.”

And this is the story of Burt, who made sharing the hard work of his bee friends some of his beeswax. 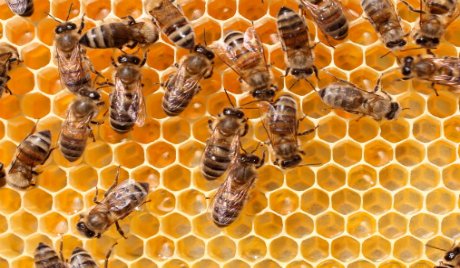 The Buzz Over The Dire Decline In Bee Populations
Worldwide, bee populations are suffering significant decline and rather than a single cause, it seems to be the result of multiple factors working in concert. The U.S. Department of Agriculture issued a report in 2012 citing a “complex set of stressors and pathogens,” and calling for “multi-factorial approaches to studying causes of colony losses,” yet stopped short of making any policy recommendations. The EPA has, sadly, been woefully lackadaiscal in taking steps to stem the problem. Perhaps that will change with the recent momentous suit filed by beekeepers and environmental groups against it for failing to protect bee populations.

Nearly 40 percent of U.S. domesticated hives did not survive this past winter, making it the worst loss to date. Far more than just giving us honey, bees are a crucial player in our food production; they are responsible for pollinating many flowering plants–by some estimates, almost one out of every three bitesof food that we eat was produced with the help of these natural pollinators. Cashews, beets, broccoli, cabbage, watermelons, cucumber, strawberries, macadamia, mangoes, apricots, almonds are just a few of many of the delicious crops our six-legged worker friends toil on.

Domesticated bees are not the only ones being affected either—wild bee populations have decreased by an alarming 90% over the last 50 years. The ecological implications are nearly catastrophic; so are the resultant economic and food supply concerns. The World Conservation Union predicts that 20,000 flowering plant species will disappearin the next few decades as a result of bee losses.
Bee die-off is in part attributed to the appropriately-ominously-named phenomenon of Colony Collapse Disorder (CCD) in which bees fly off en masse and never return to their hive. Climate change, habitat destruction, pesticides, and disease all seem to have an influence on the occurrence of CCD and are factors that often interplay with each other–the worldwide bee population decline speaks to the multiplicity of causes not endemic to specific regions.
Climate change and habitat destruction are affecting ecosystems as a whole and bees in particular. Erratic weather patterns have an indelible effect on the schedule of flowering plants. Plants may blossom early, before honeybees can fly, or may not produce flowers at all, resulting in no pollen for the bees.
The impact of pesticides on bee depopulation has been widely examined by researchers. Jeff Pettis of USDA’s Agricultural Research Service and his team found that a pesticide called imidacloprid is weakening the bees’ immune systems and allowing infectionsto spread through hives. Another group of pesticides, extremely commonly-used worldwide, the neonicotinoids, chemically-related to nicotine, could harm bees by disrupting the navigational and learning abilities they use to find flowers and make their way back to the hive. The neonicotinoids have often been likened to “nerve agents” for the neuroactive effects they have on bees. In a landmark move, the European Union passed a measure last month to provisionally banthe use of neonicotinoids for the next 2 years. By contrast, the EPA continues to greenlight chemicals widely recognized even by the EPA itself as “highly toxic to bee health,” allowing the use of the pesticide sulfoxaflor manufactured by the Dow Chemical Company.
In addition to their neuroactive effects, pesticides also tie into another element in the explanatory chain–disease–by decreasing pathogen resistance. The blood-sucking parasite, the Varroa mite, is one of the most virulent pests of bee colonies. It is dangerous not only in its own right, but also in that exposes hives to other viruses too. Another suspect is the Bt (Bacillus thuringiensis) toxin in the pollen of genetically modified corn, which German scientists found compromised bee immune systems. The bacterial disease European foulbrood is yet another pathogen.
Communities worldwide are astir about the danger of bee extinction and the buzz is certainly gaining in volume, with many states, including Oregon,passing measures to ban the use of certain pesticides. Clearly, the battle against CCD will have to be waged on a multiplicity of fronts.