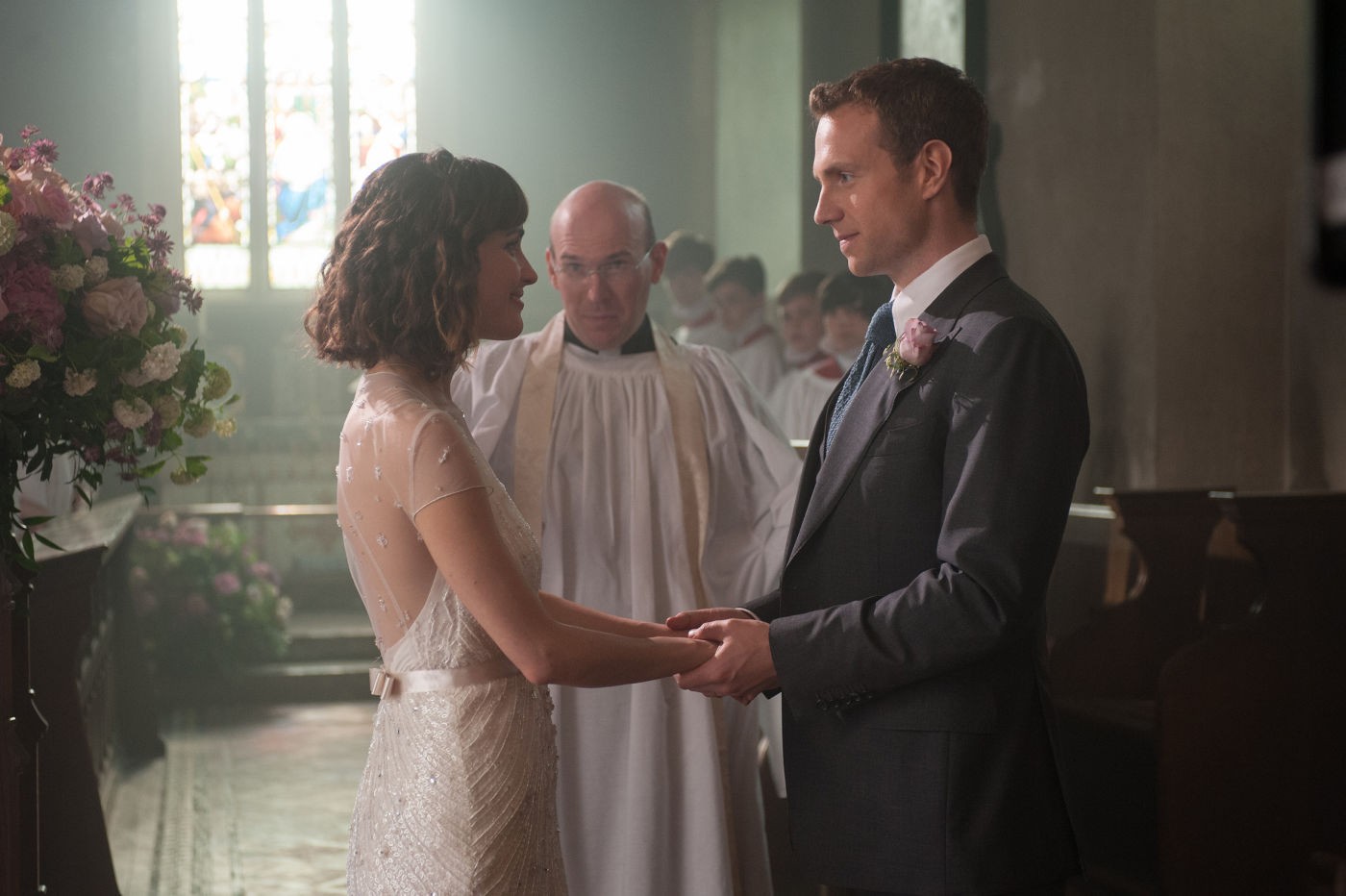 My I Give It A Year film review

Hey, look, a droll and properly cheeky romantic British comedy! Simon Baker, the scion to High Grant’s romantic lead throne—check! I Give It A Year, the new film by Borat writer Dan Mazer attempts to upend traditional rom-com plot structure by literally going about it backwards; instead of the ineluctable march to the altar, we have our characters walk away from it, literally and metaphorically. The question is whether this premise reversal alone helps the film escape well-trodden, trite territory. I gave it an hour and thirty minutes.

Newlyweds Nat (Rose Byrne) and Josh (Rafe Spall) appear to be as well matched for each as a Date Lab couple; following a seven month courtship, their marriage appears rather ill-conceived and, well, inevitably doomed. Nat works in brand management (how’s that for a nod to new media?) and Josh is an oafish writer with a Three Stooges-esque sense of humor and white boy dancing moves. Which brings us to the point of the profuse amounts of eye-rolling in this film: Nat is rolling her eyes at her hubby’s antics even at the wedding! This sort of Daria-esque behavior is so pervasive throughout I Give It A Year, with all the couples seemingly hating each other to no end. Mazer hammers the point that being married sucks so resoundingly that the cliché denouement rings hollow even by rom-com standards.

But back to the movie—Mazer has literally jam-packed it with one liners, as in think every line is a one-liner. Zingy indeed. It’s meant to be jaunty and light-hearted, but some it comes off as heavy-handed and contrived. Bawdy humor abounds, too, complete with the requisite, “Oh, look, I am in awkward threesome,” and, “Oh, no, our parents saw the dirty pictures from our honeymoon.” And Minnie Driver’s character has a ridiculous crush on Justin Bieber, so she affectionately calls her husband a bell end. Occasionally, Mazer runs up dangerously close to clumsy Mr. Bean territory, as in the scene where doves are released in a room and the results are less than romantic, shall we say. All the married couples in the film are not exactly a glowing commentary on the institution, either, with the marriage counselor of Nat and Josh’s husband-bashing proving to be one of the comedic highlights.
One surprising place where I Give It A Year is quite trenchantly on the mark is its commentary on the state of modern marriage (yes, seriously). The past several years, a lot of movies have been made with the rather melodramatic trope of, “We are so impossibly in love, but now we hate each other’s guts and we won’t explain to you why. Just watch and share in our joint misery.” Good examples are Blue Valentine and Like Crazy. I Give It A Year presents the more humorous answer to that very same phenomenon: Nat and Josh are at a crossroads because they were so desperate to get married in the first place! All of the characters in the movie keep referring to the dreaded 30s like some death knell, tolling for the immediate donning of a ring and latching on the nearest future wife or hubby. In modern romantic parlance, I  think we can all agree that the 30s have been identified as the, “You must settle down age.”
One only needs to take a look at My Friends Are Married to see that the non-married 30-somethings are still somewhat of a minority and rom-coms would have us think that single 30s somethings should make it their life’s goal to reverse their dreadful state of single-dom. As Nat explains to her better-matched romantic interest, “You are a Ferrari and he is a Volvo. I needed a Volvo.” Hardly romantic but definitely something we recognize; without meaning to, perhaps, the film offers some rather astute observations on relationships. The rush to the altar proves rather unwise for our leading couple, but I Give It A Year is still a nod to romance, as one would expect from flicks of its ilk. It offers a good bit of unusual British humor that proves to be amusing… most of the time.