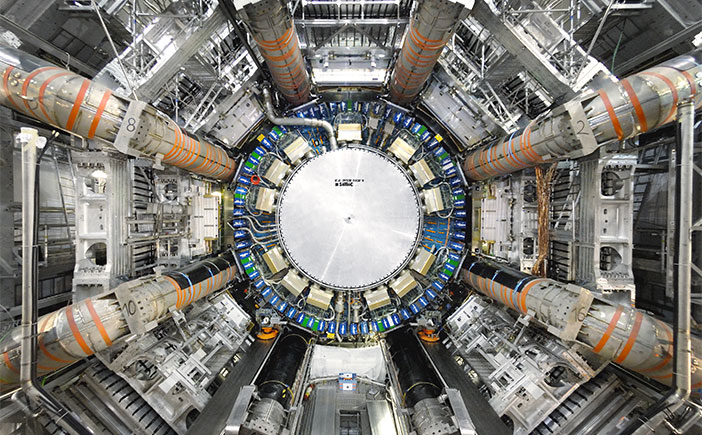 My review of Particle Fever

Particle Fever epitomizes the wide-eyed enthusiasm and awe of a “heck yeah, science!” sentiment we can all get behind. The documentary is a breathtaking look at one of the most significant scientific experiments in recent times and one that captured the public’s imagination like few others. It focuses on nothing less than the search for answers about the nature of our universe by looking for the smallest particle in the microverse, the elementary particle called the Higgs boson/a.k.a. “the God particle.”
Directed by Mark Levinson, a physicist, and produced by another physicist involved in the experiment, David Kaplan, Particle Fever makes grasp-defyingly big concepts such as what are the origins of the universe and how is matter created accessible to the viewer. Rather than relying on clever infographics, Particle Fever makes us understand *why* this experiment matters and makes the scientists’ mixed emotions of giddiness and apprehension feel palpable.

The film introduces us to several scientists at the CERN lab in Switzerland, where the Large Hadron Collider, the world’s largest particle accelerator, resides. CERN’s “accelerating science,” motto is quite fitting. As one of the physicists in the film points out, “You know it’s big, but not until you see it do you actually understand how big.” The collider is the world’s largest machine, a 17-mile ring of magnets designed to crash particles into each other at unbelievable speeds. There is a network of 100,000 computers world-wide just to handle the data; 10,000 scientists from more than 100 countries worked on the project, including people from “enemy” countries like Pakistan and India.
The fact that there is a veritable mystery at the core of the film makes the suspense and awe all the more understandable. The search for the presence and size of Higgs boson matters tremendously because it would prove or disprove the so-called Standard Model, a theory about the nature of the universe, that could only, oh, be the end of physics as we know it. No big deal. Whether supersymmetry or multi-verse ends up being the correct model has huge implications, and as one of the scientists puts it, this could mean that he has literally wasted his entire life studying something that may not even be true. Talk about momentous!
Despite its colossal subject matter, Particle Fever remains profoundly human, from the trepidations and child-like excitement of the scientists who have spent decades working on this, to the sight of Peter Higgs crying upon the discovery of something he had only theorized about. In other words, it spans the universe from the smallest to the largest. Higgs boson, the smallest particle known to exist, is also perhaps sort of misguidedly called the “God particle,” because it is the essential building block of the universe. How apropos that to understand the grandest of the grand, one has to find the tiniest of the tiny.