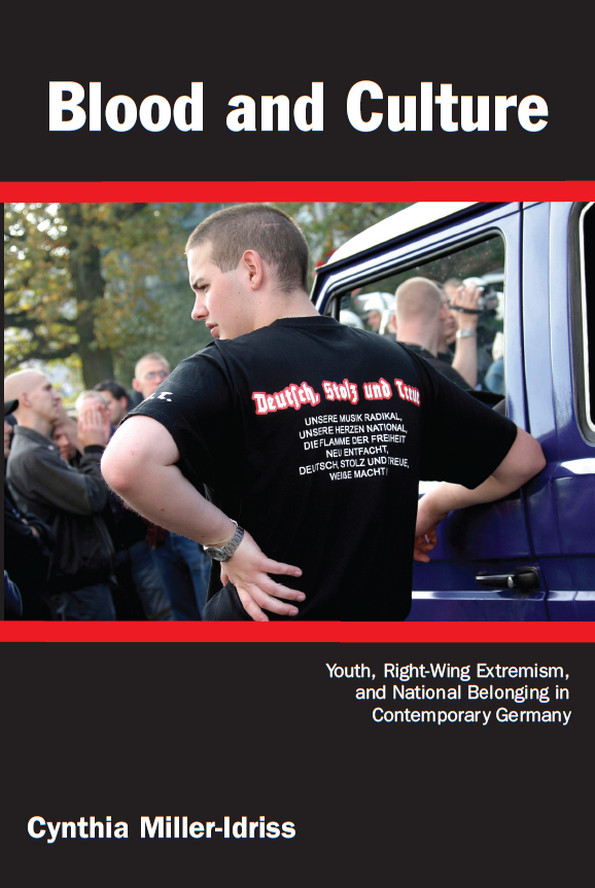 My interview with Dr. Cynthia Miller-Idriss

Much has been made of the supposed wave of hipsterfication sweeping through Germany’s neo-Nazi community. In fact, a neologism emerged for the express purpose of describing these Nazi hipsters: “Nipsters.” Adopting some familiar hipster tropes–veganism, gauged ears, and *gasp* hip hop, right-wing groups are seeking to take their message to the bespectacled, bearded masses.
Is this mere sensationalism or an actual movement? I interviewed Dr. Cynthia Idriss-Miller to get to the bottom of this locally-sourced, organic mess.
Dr. Cynthia Miller-Idriss, author of Blood and Culture: Youth, Right-Wing Extremism, and National Belonging in Contemporary Germany, talked about the commercialization of right-wing imagery in a process she calls “extreme gone mainstream.” She has studied the use of coded messages to convey a right-wing orientation for the last four years in Germany on a grant by The Spencer Foundation. Conducting interviews with high school students in two “trade” schools in Germany, she has observed the fragmentation of the scene. “There used to be a unified aesthetic image that indicated right-wing affiliation…the typical ‘skinhead’ look, if you will–shaved head, bomber jacket, and combat boots. That is really no longer the case. There is no ‘uniform.’”

Instead there are brands that tacitly and in a veiled way signal one’s allegiance. For example, the t-shirt company Thor Steinar manufactures a shirt with an image of a fox and the words “Desert Fox: Afrikakorps,” thinly veiled code that refers to the nickname of Erwin Rommel who commanded German troops in North Africa during World War II. Others are more straightforward, like a T-shirt with the words “Hunting Season” sold by Ansgar Aryan.

Dr. Miller-Idriss also spoke about the appropriation of Nordic myths and imagery by right-wing groups. “It is expressing racial purity by evoking Nordic imagery. That of Vikings, snowy glaciers, and ski slopes, all in essence implying Aryan imagery without directly referencing it.”

“We are seeing a lot more layers of coding in Germany due to the ban on the Nazi party as such. Because displaying that sort of thing in an overt way is illegal, we are seeing a lot more veiled imagery.” Some of the other images used by these sort of groups including alpha-numeric symbolism, such as the number 88, which stands for HH or Heil Hitler. In some rare cases, general freedom fighter symbols are also appropriated such as Palestinian scarves or Che Guevara t-shirts. Symbols of national pride are also prominent, as are those that convey hyper-masculinity such as Vikings with bulging biceps.

“There is clearly a divorce between style and ideology. The aesthetic expression of the right-wing movement, much like the movement itself, is extremely varied, fragmented, and not homogeneous at all. And funnily enough, one would expect the commercialization aspect of this to have the United States at the vanguard, but this is not the case–this really is a very specific to Germany phenomenon.” Ultimately, while Dr. Miller has not exactly seen first-hand the “hipsterization” of the Aryan-supremacist movement, she notes that the “traditional” neo-Nazi stereotype is a relic of the past. Style over substance has long plagued just about every subculture at some point or another–many of the new supporters of right-wing ideology are not even particularly active in the movement, nor would they describe themselves as politically engaged, period. Some, perhaps, are not even especially devoted to the ideology, instead merely displaying the trappings of the movement. The ideology, too, has undergone modification–anti-Europeanism now joins and sometimes even trumps Aryan and anti-immigrant rhetoric. Her findings in Blood and Culture indicate that, for the majority of German youth, right-wing extremism is more popular for its portrayal of national pride than its xenophobic and racist tendencies as many youth today support a culture-based rather than blood-based German identity. She ultimately finds that the extremist tendencies of German youth stem from the historical taboo of “German pride.” For the younger generation, espousing a nationalist, extremist movement is a cry for unity and belonging that has been historically absent. And that belonging can sometimes be expressed in consumer choices too.