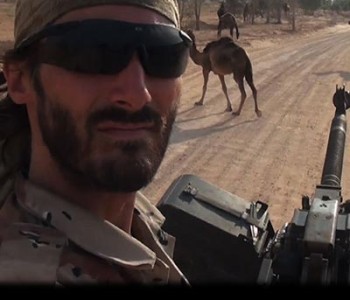 My review of Point and Shoot

If I could summarize Point and Shoot in one sentence, it would be “Indulgent, self-absorbed man-child fights a war he has no stake in, and comes out the same, unchanged man-child.” Director Marshall Curry pieces together this documentary on Matthew VanDyke, a twenty-something Baltimorean who sets out on a “crash course in manhood” journey to North Africa and the Middle East, eventually ending up as a fighter in the war to oust Gaddafi from Libyan rule.

Any hopes the viewer might have of learning something about that region or that conflict are dashed at the altar of VanDyke’s ego. This is not a travelogue; it’s the VanDyke show, which would be fine if our protagonist was moderately more engaging.

Psychological insights are hard to come by in this film. We meet VanDyke, a self-professed spoiled only child (his mother still does his laundry and buys his groceries for him), who upon finishing a Master’s degree in Middle East Studies at Georgetown without having ever visited the region, decides to fashion himself into a different person by going on a motorcycle trip to MENA. Seeking to emulate an Australian adventurer he saw on TV (yes, seriously) and not speaking a word of Arabic, he sets out on this journey of self-realization and discovery (it’s OK to groan). There’s one minor detail: VanDyke suffers from OCD, so dirty toilets and spilled sugar send him into paroxysms of ritualistic hand-washing. Yet, even this revelation does not, again, offer us any insight into that illness or into VanDyke. It seems like there are a lot of these “meh” moments in the film, and there is no rhyme or reason for their inclusion.

It is not so much his quixotic quest in and of itself that is the issue of this documentary; it is that in the entire film, we literally learn next to nothing about Middle Eastern culture. While in Afghanistan, VanDyke becomes a war reporter of sorts, making films of the U.S. soldiers there and learning how to shoot a rifle in the process. He makes friends with a Libyan “hippie” named Nuri whom he later joins in Libya during the war.

In Libya, VanDyke is captured by Gaddafi’s forces and sits in a prison for five and a half months. There, too, we are left with the maddening lack of details and insight. Five months is a long time, you would think there would be something more revelatory about the experience than the gloss-over of “it changed me forever.” Instead of returning home after he is released from the jail, VanDyke stays on to fight with the rebel forces in Libya.

This is the part of the film that offers probably the only semi-interesting commentary for the viewer, as it’s a glimpse at what modern warfare really looks like. Shooting rifles aimlessly, incessant shelling, total chaos…at times, it appears sadly cartoonish, like a deadlier version of grown men playing at war and taking photos of themselves with guns. It feels oddly surreal and video-gamish. People die, but they are taken by an unseen enemy.

We also see snippets of news coverage of VanDyke who appears interesting only when posited as “an American fighting with Libyan rebels.” Sadly enough, VanDyke’s nationality is probably the only interesting thing about him.

Ultimately, this is an incredibly disappointing film with a dearth of a message or emotion. It is a glorified selfie slideshow.