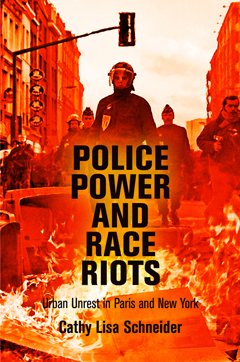 Associate Professor Cathy Schneider’s new book, Police Power and Race Riots: Urban Unrest in Paris and New York, traces the history of urban upheaval in New York and Paris, focusing on the interaction between police and minority youth. Schneider found that riots erupt when political elites activate racial boundaries, police engage in racialized violence, and racial minorities lack alternative avenues of redress.
Schneider, an expert on social movements, collective violence, policing, criminal justice, immigration, and racial and ethnic discrimination, says the book evolved out of her community work where she encountered first-hand the police harassment and racial profiling of minority communities. “This made me wonder about conducting a comparative study between what I saw in New York and somewhere else. I wanted to see how the French police were similar or different in their treatment of minority communities.”

Then, on October 27, 2005, an African boy and an Arab boy, 15-year-old Bouna Traore and 17-year-old Zyed Benna, were electrocuted while hiding from police in a power substation in the Paris suburb of Clichy-sous-Bois. A third teenager suffered serious burns. This sparked riots against police brutality and harassment in Paris and other French cities that lasted several months.
Schneider became interested in why these cases led to riots in France, while similar cases did not lead to riots in New York. Schneider began her research in Paris by interviewing the families of victims of police violence, including the brother of one of the deceased teenagers. One of her main findings was that in racially divided unequal societies, police are tasked with the job of enforcing racial boundaries. The activation of racial boundaries, Schneider found, makes violent explosions more likely. As communities are polarized along an “us vs. them” boundary and there are no avenues of redress, riots are more likely to spark.
Schneider also discovered that political campaigns shaped how police understood their jobs. In studying campaigns, she found that candidates in tight elections often won by appealing to racial fears. “These fears are often coded as ‘wars on crime’ or ‘drugs’ or ‘illegal immigration,’” she explains. In such a context, police are rewarded for increasing the number of arrests and for targeting minorities.
Schneider says that the reason there have not been race riots in New York since the 1960s is the presence of options of redress that dampen social unrest. Community organizers in New York have developed a “standard non-violent repertoire” to protest police brutality. State and federal courts also opened to minority plaintiffs and allow minorities to sue on a civil and not just criminal basis, which helps to diffuse tensions. The availability of avenues of redress, Schneider postulates, is the variable that differentiates New York from Paris.